Footsteps in the Falklands – Trip Report 2018

Being back in the Falklands is like meeting old friends again. Familiar faces, fond memories and a range of emotions that this part of the world evokes in the most seasoned of travellers. A treasure trove of wildlife, with seabirds congregating on every corner of the islands, marine mammals frequenting the coastline and penguins marching across pristine sandy beaches. A visual feast that overwhelms the lucky few, who visit. This place will leave you wanting more. And there is nowhere else in the world more accessible that offers such an intimate experience with so much diversity of animals.

Saunders Island is the second largest offshore island in the Falklands and contains some of the most dramatic landscapes, including wetlands, lakes and some rolling peaks. The narrow peninsula, sandy beaches and subtle cliff faces around an area called The Neck, are home to Gentoo, Magellenic, King and Rockhopper penguins as well as the impressive numbers of Black browed albatross that dominate the northern slopes of Mt Richards. Their numbers can reach around 12,000 pairs during the breeding season.

One of the most enjoyable aspects of Saunders is exploring the island on foot. The walks always involve traversing the coastline along various nature habitats and many sightings of different species. There are two areas on Saunders that stand out, The Rookery and the Neck. These places will surprise, delight and then blow your mind. 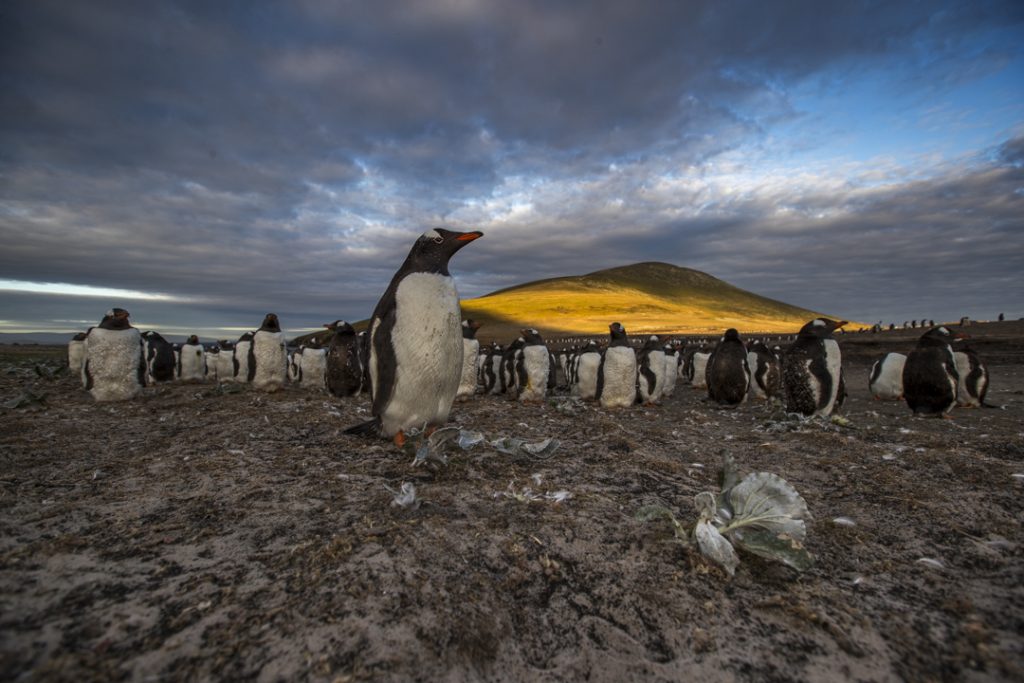 The Rookery is a remarkable place to visit. There are large numbers of Rockhopper penguins that have established colonies high up on the hills above. Making their daily journey out to sea to forage for food for their young chicks and returning each evening. The highlight is the penguin shower at the bottom of the cliff. As the penguins emerge from the rough sea, they line up for a fresh water stream that cascades from the gully above. There seems to be some penguin etiquette, and any penguin spending too much time under the shower, will be strongly encouraged to move on to let the next Rockhopper have a wash and a drink after a hard day fishing.

With one of the larger Black Browed Albatross nesting colonies in the Falklands, the Rookery with its beautiful backdrop sets the scene for large colonies stretching along the northern slopes of Mt Richards on Saunders Island. Black Browed Albatross nest along the cliffs protecting their eggs around October and their chicks once hatched 72 days later. 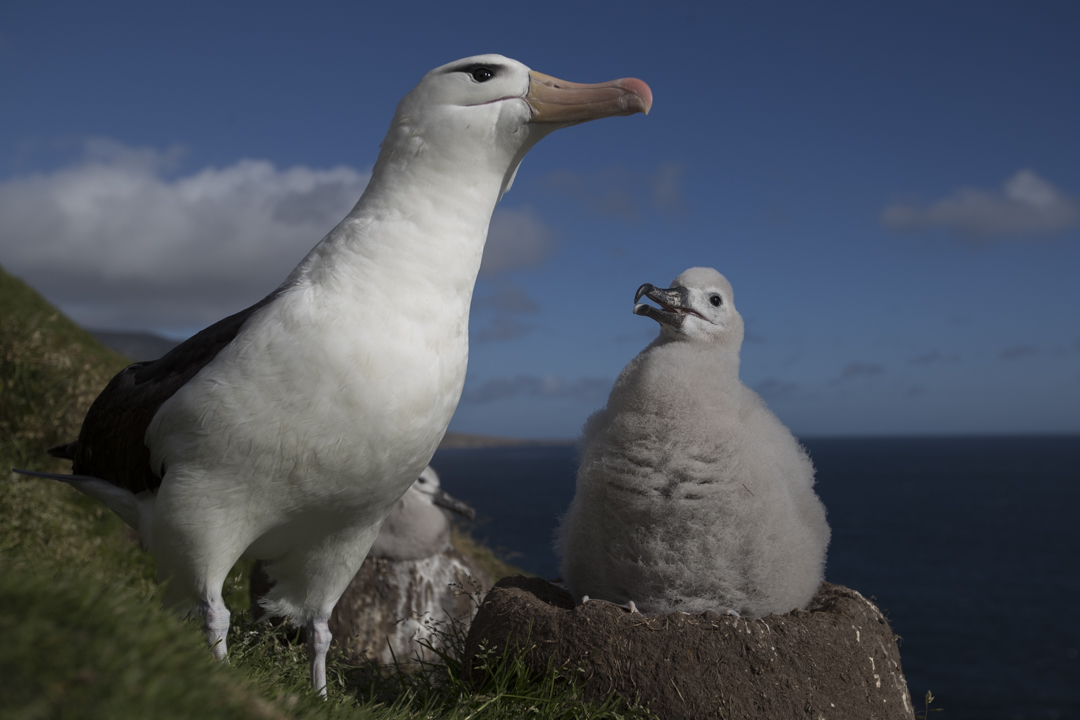 The Neck is a flurry of activity with Gentoo, Magelleanic and King penguins congregating across the narrow stretch of sand. Skuas, Giant Petrels and Caracara’s patrol the areas looking for vulnerable chicks or injured penguins, ready to strike. There is so much to explore on Saunders and so many varied behaviours at different times of the year, that you will need to visit this spectacular island more than once.

Bleaker also has a substantial King cormorant colony situated just outside the settlement. Hundreds of cormorant chicks shelter in the long grass waiting for their parents to return from a day fishing. The adults fly into the colony and are greeted by hungry chick’s eager to feed as soon as possible. The chicks are quite comedic and with chase the parent around with great vigour and insistence. However, the Skuas are on patrol, ready to steal morsels of food that fall from the parent’s mouth, they will often disrupt the parent in the process forcing them to drop the food creating a scuffle between the Skua’s and cormorants. 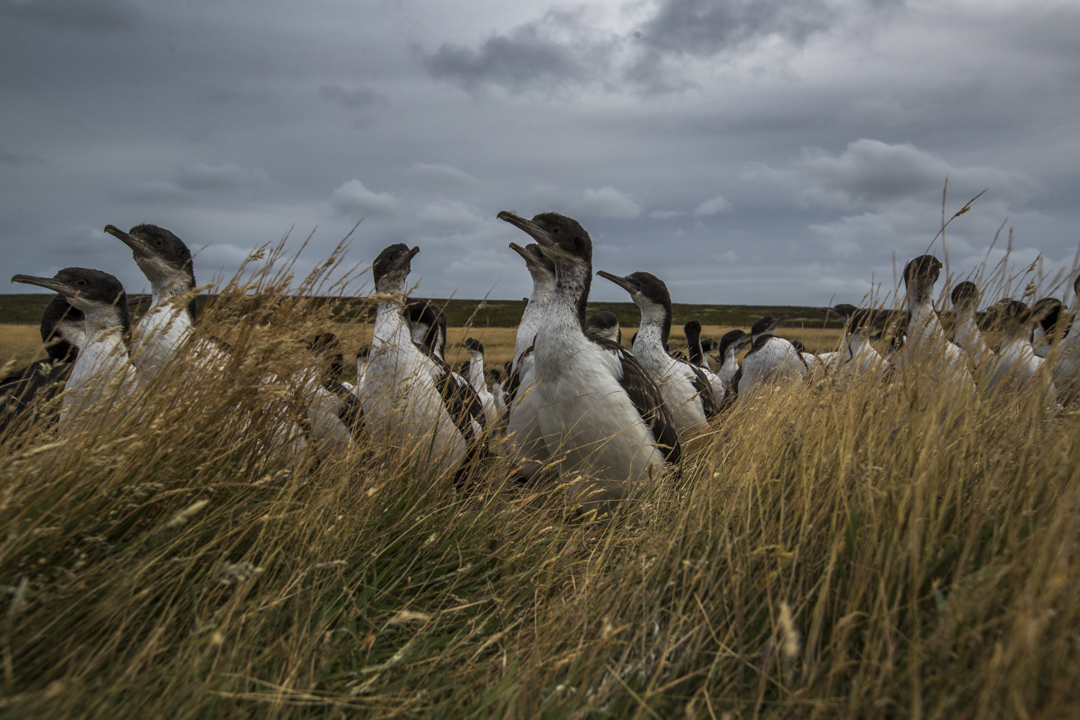 Carcass island has so much to offer. An outer island with large sandy beaches and picturesque slopes stretching along the north west of the island. It is rich in wildlife, birds, penguins and a variety of flora. Hiking along the coast is spectacular as you can get up high along the ridge line or low down along the coast. Either way you can walk for 5km in either direction and be presented with unique parts of the island.

At the southern end of the island you come across large numbers of Magellanic and Gentoo penguin colonies near the grass plains and long tussock grass close to Leopard beach where they return after foraging at sea.

At the Northern end of the island elephant seals line the beach and make their way up the creeks and small streams where you will find these large marine mammals resting. The young weaners will often be playing in the shallows as the large adults cosy up together on the beach or in the narrow muddy streams further on shore. They are quite nonchalant and will barely acknowledge your presence. During the breeding season they can be quite aggressive with each other and battles will take place with the various beach masters to control the beach and protect their harem of females. These are impressive creatures but when they are not mating they are very subdued and will rarely move too far or exert any energy at all. 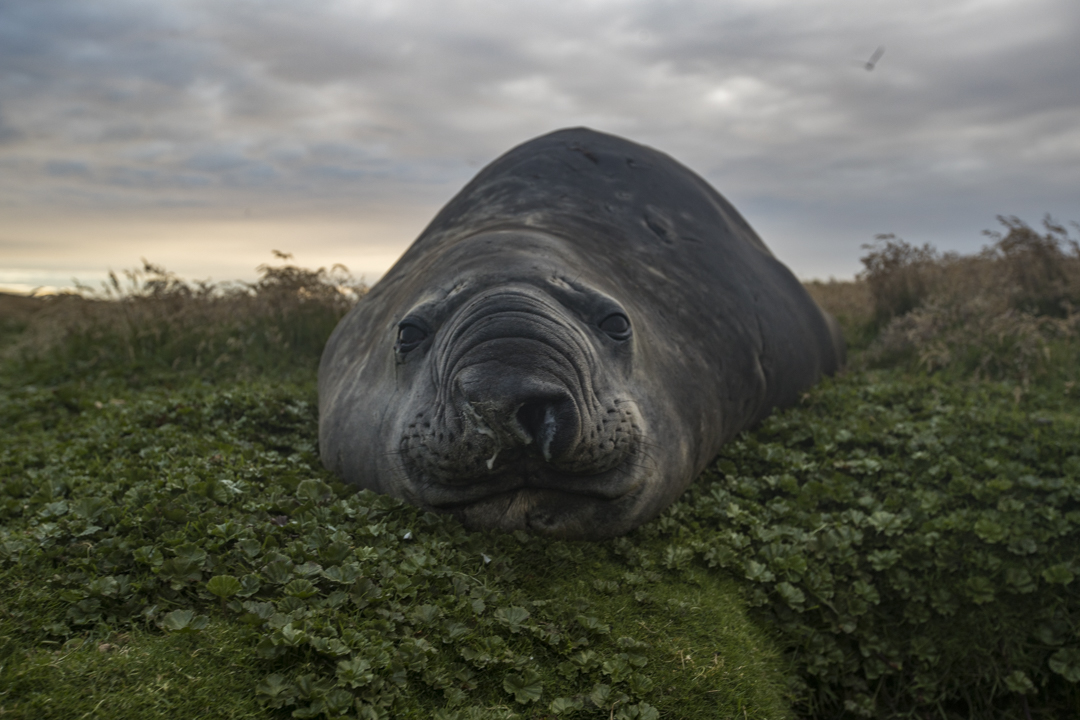 From Carcass you can easily get across to West Point Island which has spectacular sea cliffs with a large colony of nesting Black Browed albatross and Rock Hopper penguins. The Devils Nose is a rocky promontory that juts out into the sea. There are about 400 pairs of Rock Hoppers and 2,000 breeding pairs of Black Browed albatross. Surrounded by tall tussock grass, a walk down to the colony reveals the large number of chicks lining the cliffs.

A trip across to West Point takes about 40 minutes by boat, and sightings of whales, Peales Commerson dolphins and sea lions is common as you traverse across the channel between Carcass and West Point Islands.

Bird life is abundant across the Falkland Islands with so many species inhabiting the shoreline, cliffs and grasslands, some of the more common sightings are Striated Caracara, Oyster Catchers, Meadow larks, Night herons, skuas, plovers, dolphin gulls and steamer ducks to list a few. But the list goes on and on. And every new day reveals a new species to tick off the list. This environment is thriving and the many species that inhabit the islands are becoming commonplace across the islands. Very rarely do you find a place so untouched and such a haven for wildlife. 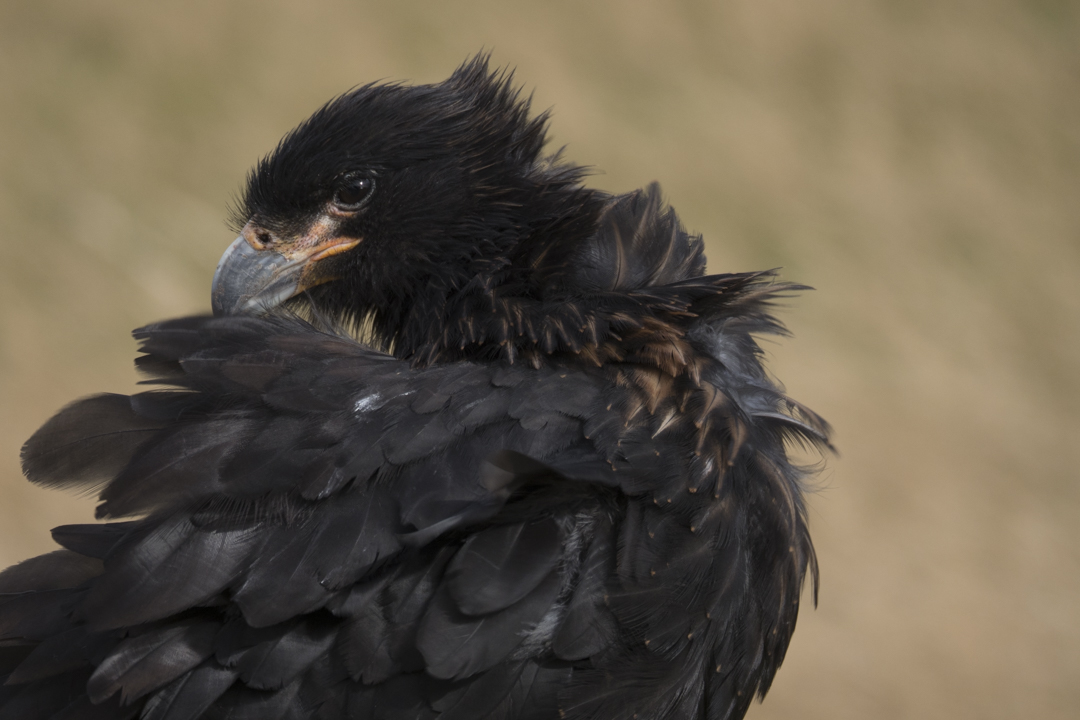 Below is a list of the many birds we saw on our 2018 Falklands photography workshop:

Its hard to say which part of the Falklands I love the most, as they are all so unique and the locals are so endearing with larger than life personalities. But I do find myself going back to the same places as I know the experience will be amazing each time.

Sea Lion Island is one of my favourite places to visit (not just in the Falklands, but globally). It has so much to offer, but the chance of encounters with baby elephant seals and patrolling Orca is what makes this a truly special place to visit. One of the largest breeding sites for elephant seals, Sea Lion island is designated a National Nature Reserve. In the breeding months, thousands of elephant seals line the beaches and battles can be fierce to secure a harem of females. 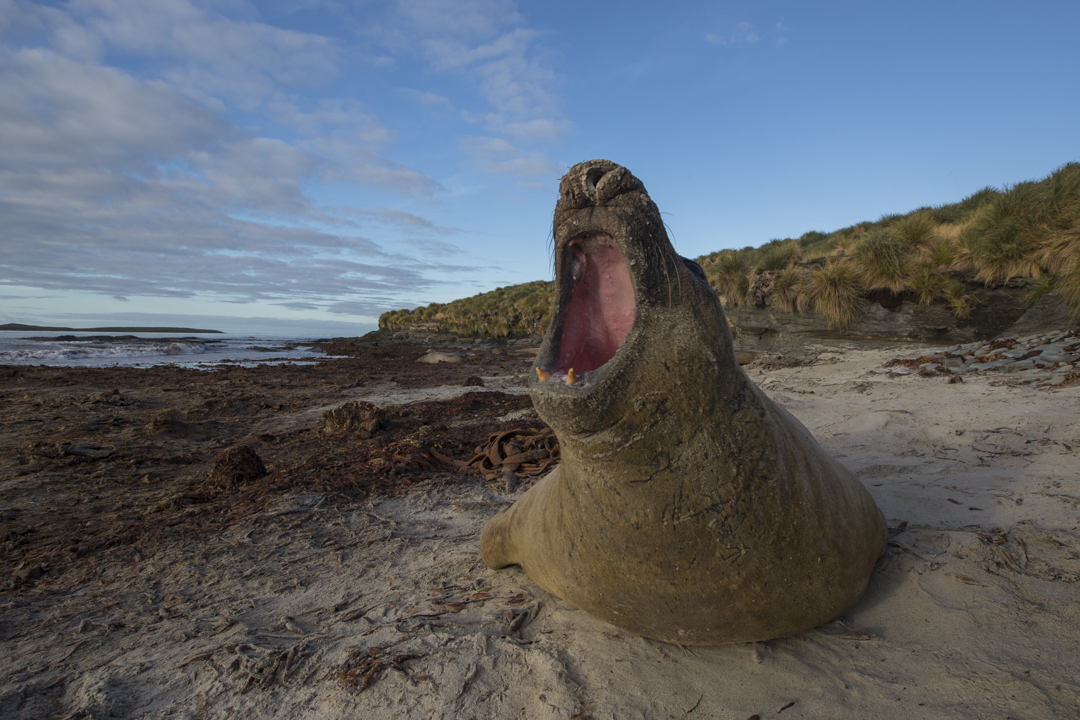 We often see the killer whales patrolling the edges of the baby elephant seal creche or the rock pools and kelp forests where the young weaners spend most of the time. The pods of whales are close knit family groups and will regularly return to the area each year between October to February. These impressive mammals with their large dorsal fins hunt for penguins and baby elephant seals.

The most exciting thing about a visit to Sea Lion Island is the chance to see the Orca Puma teaching her young offspring how to hunt baby elephant seals in a small rock pool accessed only by a narrow shallow channel. She is a specialised hunter and the behaviour has not been seen by another Orca before. The hunting method comes at great risk to the female, she could get stranded at any time and has very little room to manoeuvre to exit the channel.  I am yet to personally see this behaviour but am determined to keep visiting this part of the world with the hope of being in the right place at the right time.

I have spent a lot of time at Volunteer Point over the last few years and I find that words can barely describe the beauty of this place. The beaches are like nothing you have ever seen before, pure white sand surrounded by rolling hills and a lagoon that is connected to the open ocean. But this is only touching the surface as it is more than an impressive landscape, it is habitat for Gentoo, Magellanic and King penguins. People travel from across the globe, just to visit the most accessible King Penguin colony in the world. 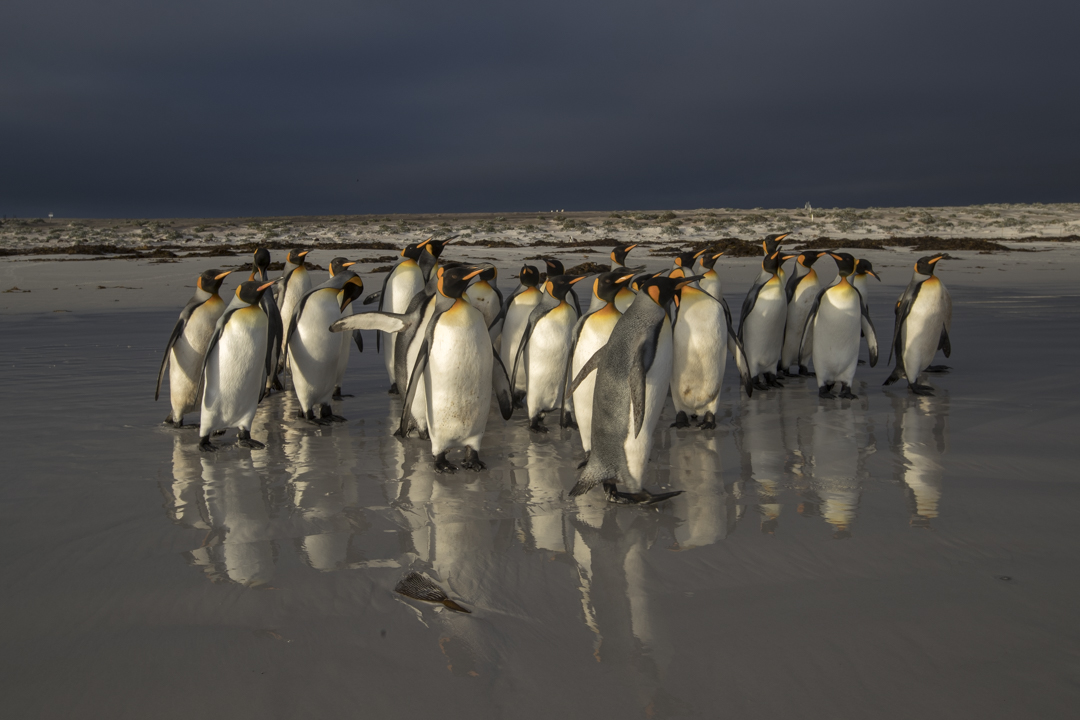 The Falklands is a hidden gem and a part of the world that offers wildlife experiences that are second to none. This is a place where even a seasoned professional photographer will be lost for words, a place where the visual senses are heightened by the diversity of life and the opportunities that present themselves each day. The best thing about photographing in the Falklands, is that you are not on a schedule and you can spend time in a place getting to know it and learning about its wildlife and the environment in which these animals thrive. I am now addicted. Next season will be my 4th year bringing people to visit these amazing islands. Visiting the familiar places and exploring the new islands is what makes these trips so fulfilling. I feel privileged to be able to spend time here and share the experience with others.