Explore the ‘Land of Ice and Fire’ where snow-capped peaks rise above glaciers and active volcanoes rumble. Walk along a black sand beach strewn with glittering bergy bits and discover  geysers and fumaroles and bubbling mud pools, or explore spectacular fjords and impressive waterfalls, in one of the most geologically active places on earth. Our specialist naturalists and historians will reveal the Iceland below the surface – a land rich in wildlife, culture and fascinating human history.

Important Note:  in order to experience some of Iceland’s incredible scenery, a number of the shore excursions on this itinerary require overland coach travel away from the coast.

Arrive in Reykjavik and transfer to our group hotel. Upon check-in at Fosshotel Reykjavik, reception staff will provide you with Aurora Expeditions cabin tags. Please fill out the luggage tags clearly, showing your name and cabin number to allow us to deliver your luggage to your cabin. At tonight’s voyage briefing, enjoy a welcome drink and meet fellow expeditioners.

Check out and enjoy a classic tour of Reykjavik on a panoramic tour to experience the city’s unique architecture and culture before transferring to the pier for embarkation.After boarding, there’s time to settle into your cabin before our important safety briefings.This evening meet your expedition team and crew at the Captain’s Welcome Dinner.

Stykkisholmur is the starting point of our adventures on the Snaefellsnes Peninsula, gateway Snæfellsjökull National Park. Stykkishólmur is located by Breiðafjörður Bay on the north of Snæfellsnes peninsula and is surrounded by wonderful views of the innumerable islands. One of the defining landmarks in Stykkishólmur are the old houses in the old city centre, some of which were owned by Danish traders, and every year in August there is a Danish town festival in Stykkishólmur called Danskir dagar or Danish days. The oldest house in Stykkishólmur is the Norwegian house, which dates back to 1832. The inhabitants take great pride in preserving the old houses and walking in the centre of town is like walking in another era.An area of diverse landscapes, characterised by lava fields and glistening fjords and home to bird-rich Breidafjordur Bay. The area is crowned by the magnificent, ice-capped Snæfellsjökull volcano, a 700,000-year-old dormant subglacial volcano, visible from Reykjavik on a clear day and immortalised in Jules Verne’s Journey to the Centre of the Earth.Disembark the ship at approximately 8.30 am to commence today’s full day (7 hours) excursion visiting the following areas:Arnarstapi was an important trading post in the past and had a much bigger population than it has now. Columnar basalt, ravines and grottoes surround the Arnarstapi pier. There is a large arctic tern colony in the village itself, and a walk along the coastline is a great way to see birds such as kittiwake, Arctic tern and fulmar. You will also pass magnificent lava formations. The seaside and the cliffs between Arnastapi and Hellnar were made a Natural Reserve in 1979. A sculpture of Bardur Snaefellsas by Ragnar Kjartansson stands by the beach at Arnarstapi.At Bjarnarhöfn you will enjoy a guided tour of the shark museum and have the opportunity to taste the famed cured shark.Though Grundarfjörður is not the most well-known town in Snæfellsnes, Mount Kirkjufell is certainly one of the most famous mountains in Iceland, if not the world. It is not unusual for photographers from all over the world to make their way to Grundarfjörður for the sole purpose of photographing this unique landmark which has even starred in a number of films. However, there is a lot more on offer in Grundarfjörður than just Mount Kirkjufell. Nature abounds, with vibrant birdlife and spectacular waterfalls.En route to Westfjords, we sail past the immense Látrabjarg cliffs, Iceland’s westernmost point and home to a huge population of razorbills and puffins.

Over the next two days, explore the Westfjords region featuring outstanding landscapes with jaw-dropping views of dramatic fjords carved by ancient glaciers, sheer table mountains that plunge into the sea and pristine North Atlantic vegetation. The region features attractive towns such as Isafjordur, the famous Dynjandi waterfall, and spectacular fjords offering kayaking excursions, hiking trails, and bird-watching.In genuine expeditionary style, we keep our itinerary flexible to allow for spontaneity. We plan to visit Hornstrandir peninsula, one of Iceland’s remotest and most pristine regions filled with many deep and dramatic fjords, towering bird cliffs, stunning natural beauty and opportunities for wildlife encounters. Enjoy the bountiful silence and magnificent landscapes seen by the few adventurers that make their way here.

Picturesque Akureyri is Iceland’s second largest city outside the capital area with a superb snow-capped mountain backdrop. Explore the old town, with its beautifully maintained period houses before heading inland to nearby Mývatn region – an area said to be the most geologically active area in Iceland.

Shore Excursions (choose one of the following):

Located approximately 40 km (25 miles) off the mainland, Grímsey is a verdant grassy island, probably best known for its proximity to the Arctic Circle, which cuts across the island. Many people travel to Grímsey just to say they have stepped across the imaginary line. With a tiny population of approximately 100 inhabitants, it’s a fantastic place for Zodiac cruising, kayaking, and photographing seabirds such as guillemots, gulls and puffins.Leaving Grímsey to return closer to the mainland, we spend time scanning the waters of Skjálfandi Bay around Húsavik, a town known as the Iceland’s ‘whale watching capital’, home to up to 24 different whale species, as well as dolphins and 30 variety of birds. The largest animal on earth, the blue whale, has also been spotted in Skjálfandi Bay, and if you are lucky, you might catch a glimpse of this magnificent creature as well as others, such as orcas, fin whales and pilot whales.

Mjóifjördur (meaning narrow fjord) is an 18 km / 11 mile fjord on Iceland’s east coast length is a little-known gem cherished by locals. Hidden between Nordfjördur and Seydisfjördur mountains that provide shelter and pleasant weather, the fjord is known by locals as an excellent place to soak in the peaceful surroundings and for its spectacular waterfalls – ideal for kayaking and Zodiac cruising.Mjóifjörður is an exceptionally beautiful, tranquil and remote area with spectacular cliffs, and because of the fjord’s still weather it has lush green hills and exceptionally rich flora lining its shores. It also has the impressive Prestagil (The Priest’s Ravine) and the Hofsárgljúfur Canyon with delightful rivers and waterfalls. If it weren’t for the weekly ferry that comes here once a week in the winter, the local people would be completely isolated. At Asknes are the remains of an old whaling station, the largest in the world at the time, built by the Norwegians around 1900, with over 200 hundred workers. Today, on the way to the tiny village, Brekkuþorp, where only about 20 people live, a shipwreck on the shore acts as a haunting reminder of the town’s whaling past.

Höfn is a lively fishing town with a healthy population of 1,800, and gateway to Vatnajökull National Park – one of the most spectacular and special parts of Iceland, home to Europe’s largest glacier, Vatnajökull – our shore excursion for the day. We’ll also hike in Skaftafell National Park, which was established in 1967, but from 2008 it became part of the larger Vatnajökull National Park, Europe’s second largest after Yugyd Va in Russia. The park also boasts colourful mountains and deep valleys, as well as rich birdlife, reindeers and seals.Inside the national park you can find glacier tongues resting on the green fields of the lowland, Jökulsárlón glacier lagoon, a glacial lagoon filled with floating icebergs that wash up on shore and stand gleaming on the nearby black-sand beach, dubbed Diamond beach. Enjoy an amphibian boat excursion on the lagoon to photograph the icebergs.

Located off Iceland’s south coast, the Westman Islands (Vestmannaeyjar) were formed by volcanic eruptions around 10,000 years ago. Sail past Surtsey Island, a UNESCO World Heritage site that emerged from the sea in 1963 and is one the youngest land masses on earth. Westman Islands are surrounded by 15 other uninhabited islands and around 30 rocks and skerries offering refuge for rich array of seabirds. Westman Islands are considered to have the largest Atlantic puffin colony in the world, and when sailing around the islands it is not uncommon to see puffins but also whales and seals.Heimaey is the main island in the archipelago and it has the population of around 4,200. Ashore on Heimaey, the only inhabited island in the archipelago, we see half-buried houses that remain from a violent 1973 eruption of Eldfell volcano, which you can hike up if you wish. A visit to the weather station offers bird-watching opportunities and splendid views of the surrounding islands.Eruptions are a big part of the history of the Westman Island, where there are two volcanoes – one that erupted some 6,000 years ago, and Mount Eldfell that erupted in 1973, forcing all of the island’s inhabitants to evacuate for the mainland. Serendipitously, due to bad weather the day prior to the eruption, all the fishing boats remained in the harbour and were able to help transport Heimaey’s inhabitants to the mainland. You can learn more about the story of the eruption and the aftermath at the fascinating Eldheimar museum, which includes a display of a house that was buried in ash during the eruption.

After breakfast, bid farewell to the expedition team, crew and newfound friends as you disembark in Reykjavik, and transfer to downtown Reykjavik or to Keflavik airport to continue your journey.

NOTE: At the conclusion of the voyage, we do not recommend booking flights departing prior to 12.00 pm on the day of disembarkation in case there are delays. 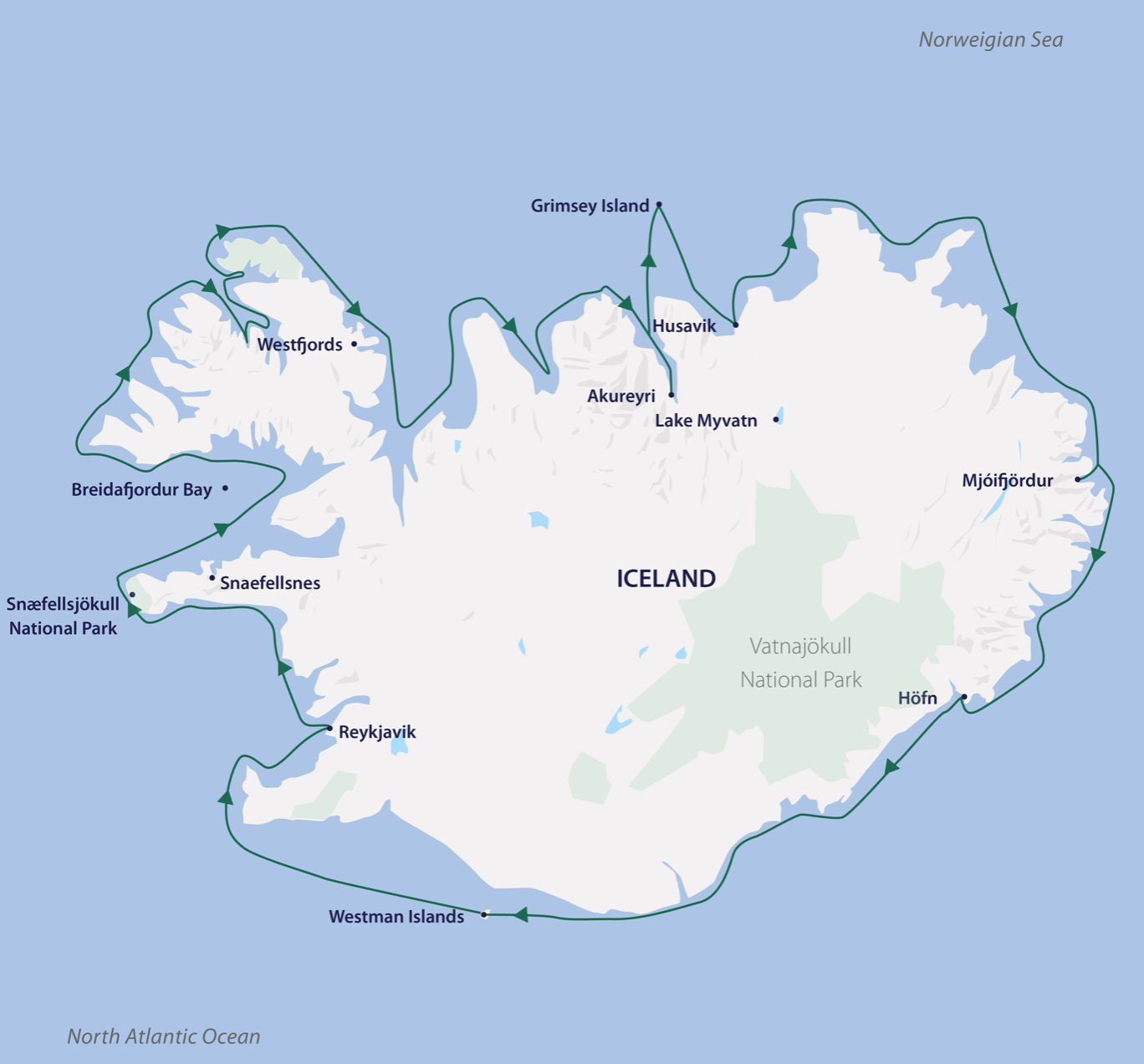 Important note: In the spirit of expedition travel, we encourage exploration and adventure offering flexibility in challenging environments. This itinerary is only a guide and is subject to change due to weather, sea and other conditions beyond our control.

To register your interest to join us for this once in a lifetime experience, click here.

Aurora Expeditions requires all embarking crew, Expedition Team and our guests to be fully vaccinated against COVID-19 prior to embarking on any of its cruises.

Please refer to the latest updates from Aurora Expeditions here.